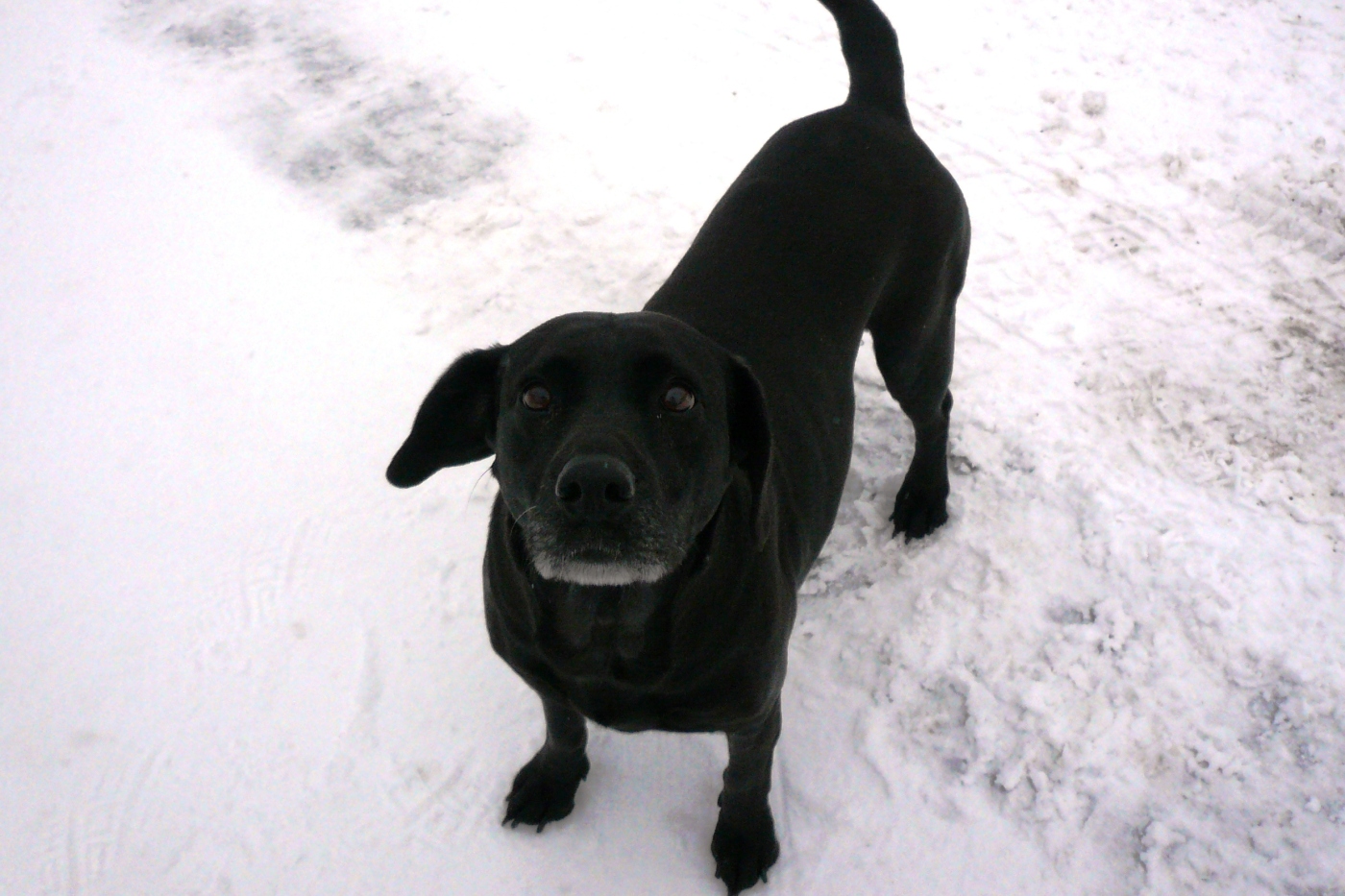 This post is a bit of a long time coming – as it’s been several months since we Outlander fans have bid adieu to Season 2 and the streets of Paris – but I’ve been reminded recently of one who I don’t think got a proper au revoir, and that wee critter is Bouton.

Like many of you, I went through more than my typical tally of tissues while watching the episode “Faith”. While absolutely gut-wrenching for the Fraser family, I have a feeling that this episode struck some of us a bit more personally than other episodes because like our heroine, we’ve also experienced miscarriage.

It’s not my intention to solicit condolences as I am now a very happy mother of two wonderful children and my miscarriage was several years ago. I’d just like to note that I had a personal connection with this episode, because like Claire, I had a dog at my side.

Excerpt from Dragonfly in Amber, Ch. 24 The Bois de Boulogne

“The dog, as unhesitating as his mistress, whirled smartly in mid-step and leaped to the foot of the bed.  Once there, he took a moment to knead the bedclothes with his paws, and turned three times widdershins, as though taking the curse off his resting place, before lying down at my feet, resting his nose on his paws with a deep sign.

Through the gathering fog and the icy numbness that wrapped me, I dimly appreciated her gesture.  With no child to lay in my arms, she had given me her own best substitute.

The shaggy weight on my feet was in fact a small bodily comfort. Bouton lay still as the dogs beneath the feet of the kings carved on the lids of their tombs at St. Denis, his warmth denying the marble chill of my feet, his presence an improvement on either solitude or the company of humans, as he required nothing of me. Nothing was precisely what I felt, and all I had to give.”

In all truth, my own story was rather dull.  One day I was pregnant. I was happy, healthy, and traveling for work.

And then one day I was spotting. After a panicked trip to the doctor, followed shortly by the “we couldn’t find a heartbeat” ultrasound, the pregnancy was over.

I was very early in my pregnancy – only 7 weeks – but after watching “Faith” I was reminded again of that devastating heartbreak and the several months following it as my body recovered.

After a year of trying to become pregnant, the loss of our first pregnancy was shattering.  My miscarriage wasn’t the result of trauma or sickness, but fell into the category of “Sometimes it just happens.  We don’t really know why.”  Granted, that felt more than a bit dismissive at the time, but it was nevertheless true in my case. I was assured I was perfectly healthy and I’d most likely get pregnant again.

However, the reality of the months following the miscarriage were a sad and tedious time of healing and learning.

I learned alarming statistics like between 8 and 20% of pregnancies end in miscarriage before the 20 week mark.  I learned that I needed to have bloodwork done for several months to monitor the level of pregnancy hormones in my system.   I learned I had to do so because my body was apparently holding on to ‘pregnancy tissue’ and was fooling itself into thinking I was still pregnant. I learned what a D&C was, and was thankful I didn’t have to experience one. And I learned that we should wait several months before trying to get pregnant again, because the risk of miscarriage during that time was even greater for me.

That period of time following the miscarriage seemed never-ending.  I appeared perfectly healthy to everyone else – which I was. I was walking and talking, working and laughing. But I was reminded constantly that my body rejected something my heart wanted so much. I felt broken and I felt fragile and I HATED that feeling.

As a result, I turned inward, blamed myself, and worried if I’d ever become a mother. Would I miscarry again? 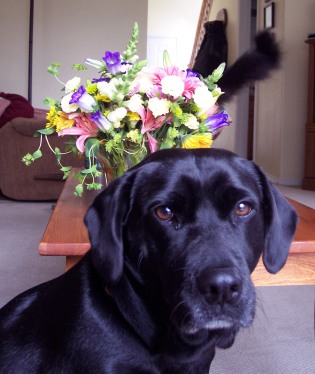 My constant companion during that time (and many days before and after) was my sweet dog Sophie. I’d had Sophie for a few years after finding her during a lunchtime visit to a local animal shelter.  Her big brown eyes followed me around constantly, and she always seemed to stay within my reach. She was with me when I had no words or more importantly didn’t WANT any words.

And by no means am I being dismissive of my husband during this time.  He’d just suffered the same loss as I and I’m sure was equally heartbroken.  I was surrounded by friends and family who were extremely supportive of me, but after a month or so of having the same –  “How are you today?  Are you feeling okay?  Try not to worry.” – types of conversations, one learns to try and move on, and keep the internal doubts silent.

Life was moving on and my quest to become a mom was really only getting started. I knew all of that, but I was still terrified.

But Sophie didn’t mind.  She stayed by my side and reminded me of her presence with a reassuring tail-thumping hello every time I walked into a room, or a persistent nudging to Never-Stop-Petting-Her when she sat at my feet.

Thankfully I became pregnant again a few months after the miscarriage. Each week of the pregnancy was a mental and emotional victory for me. One week closer.  Another good checkup.  We could do this. She’s safe. She’s healthy. We can do this. She’ll be fine.

Sophie continued her human/canine therapy with me while I was pregnant, and looking back now, I can’t help but wonder if SHE was nesting too.  The moment Julia entered our world, Sophie was IN LOVE.  She always slept near her, and jumped the second the baby made the slightest squeak.  Eyeballing me with a plaintive “Aren’t you going to DO something?  She MADE A NOISE!” 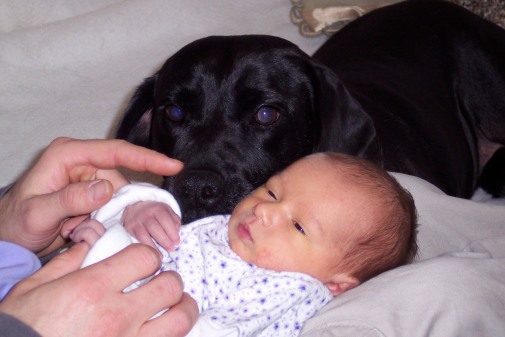 At one point my husband and I had to remind Sophie that the baby wasn’t HERS. She was ours.  That turned out to be completely untrue, because the two of them quickly became a pair.  In fact, the dog was the first being to elicit an audible GIGGLE from our daughter! For a big ole animal lover like me, it was pretty amazing to behold.

You see, I believe that ALL dogs have the ability to act as therapy dogs like Bouton.  Humans and dogs have evolved together and share this beautifully magical interspecies bond with each other. Even if your dog’s therapy only consists of sneaking into your bed during the middle of the night and farting so badly you wake up suffocating, somewhere in that stench is a bond. Farts of love, if you will.

They protect your home, provide companionship, and offer babysitting skills in the form of allowing toddlers to thump them and allow sticky-fingered hair-pulling in exchange for a neglected bowl of crackers.

But ultimately, a dog’s greatest attribute can be their loyalty. And in those rare occasions, pet owners experience the magic of bonding with an animal so strongly that we can not only say “She was my dog.” but also add “And I was her human.” 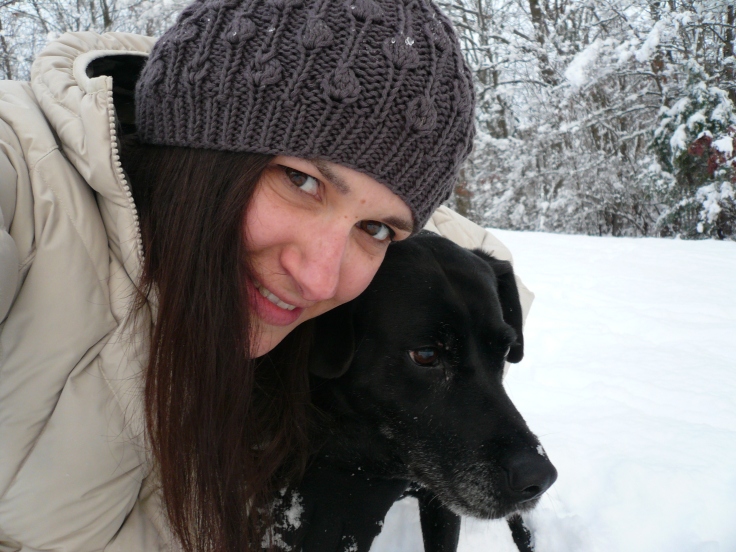 We were lucky enough to have Sophie until she was 14 years old.  She was with us through three houses in two states – including a move across the U.S.  She was there when we got married and when we had our two children.

So, here I am now, an unbelievably fast eleven years after that miscarriage – a very proud mom of two children (and a cat and two dogs) who drive me just a little bit nuts on a daily basis. I love them all, but I know I’ll never replace that particular dog and I’ll always be thankful I had her at my side during some of my life’s most memorable moments.

The Story of Scamp – Becoming Bouton

While my dog was perfectly wonderful to me, you may want to read a bit more about the dog we came to love during Season 2.  What has this little guy been up to since Season 2 wrapped?  Luckily for me, Scamp’s owner was kind enough to let me know and share a few lovely pictures and stories with me.

Not only is Outlander’s Bouton extremely intelligent and perfectly cast, but this wee doggie’s rise to fame is possible because he was rescued as a puppy in 2010. His non-famous real-dog name is Scamp, and he’s owned by Fiona Clarkson, the manager of Dumfries and Galloway Canine Rescue Centre in southwest Scotland. (Actually, Fiona tells me her daughter is really Scamp’s owner.)

Fiona saw something special about this old-souled dog and knew he had talent. Fast forward through months of training and a few years of auditions, and Scamp’s career with animal agency Creature Features landed him a roll as canine-genius Bouton in the summer of 2015. (And yes, I admit it – I got weepy when I saw his casting announcement.)

To read more about Scamp’s early work and his Outlander audition, click here.  According to Scamp’s mom Fiona, our little star did an amazing job for a soft drink commercial, but sadly his work never made it to the tv screen.  Apparently the commercial discussed neutering –  but the soft drink company decided the idea was a negative association for their product.  Yipe!!

In the time following his work as Bouton, Scamp continues to work with the Rescue Centre as their champion and mascot during various events.  When that busy schedule allows, Scamp enjoys finding comfy spots with his golden retriever family, including finding rare bits of Scottish sunshine.

Now HERE’s where I think we Outlander fans can do a bit of good for Scamp’s home.  His rescue center – like most animal rescue organizations – is sadly always in need of funds to help house, care for, and ultimately find loving homes for their animals.  Outlander fans are well-known for their kind hearts and compassionate donations, so why not consider donating to this shelter as well. (And who knows? With our help these folks could be lucky enough to find Rollo!)

Please follow the link below to find out how to donate:

This site uses Akismet to reduce spam. Learn how your comment data is processed.